While the role of mothers in the healthy development of children garners a lot of our attention, the role of fathers is often seen as simply that of the provider. Lately, even that perception has become unpopular as women spend more time in the workplace and become more financially independent. So, what does science actually tell us about the role that fathers play in child development?

Over the past twenty years, “fathering” has become a hot topic. And none too soon, because it turns out that dads are critically important to the healthy and well-rounded development of both boys and girls. National Fatherhood Initiative  research clearly shows that many of our most pressing social problems can be directly related to the absence of fathers. That alone should be enough to convince us that children are best served by having fathers who are actively engaged in their lives.

[callout title=Fathers & behavior]The messages that fathers send through their words and, more importantly, their behavior set the tone for much of their children’s future in terms of interpersonal relationships.[/callout]

But, the role of dad goes even deeper than that and it begins at conception. We know from research that when the father is emotionally and financially supportive of mother during the pregnancy, the outcome is better. During pregnancy, mother’s biochemistry will change significantly depending on her emotional state, which is largely determined by how secure she feels. Men who work hard to ensure that the mother of their child feels safe and cared for, both emotionally and financially, make a significant contribution to the health and well being of their unborn child.

Early in life, the primary role of physiological regulation of the infant will fall to mother. But sleep studies show that father can also play a role in physiological regulation, and in rare cases where mother is absent his presence is critical to the baby’s health and development. As the baby develops, this interplay of interaction between baby and both mother and father will remain very important.

Each parent brings unique gifts and strengths to the developmental process, especially with regard to behavior. Responsible fathers become crucial role models through their behavior towards both the children and their mother. This becomes especially important during the adolescent years as teens begin to negotiate their way through ever more complex relationships with their peers. Responsible fathers teach their daughters how a woman should expect to be treated by a man. They teach their sons how to regulate their behavior towards other boys and how to treat girls with the respect they deserve. The messages that fathers send through their words and, more importantly, their behavior set the tone for much of their children’s future in terms of interpersonal relationships. That is a huge responsibility. 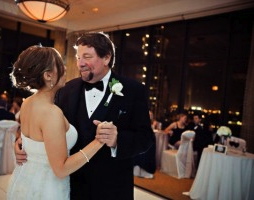 I am the father of a daughter and I think I am not alone in saying that one of a father’s greatest fears is that his daughter will one day be swept off her feet by someone who doesn’t deserve her. My daughter married a wonderful guy two years ago. When I walked her down the aisle it was one of the best moments of my life. First, because she was so happy and like all dads when my little girl is happy, I’m happy. Second, because I knew she had chosen well. I like to think at least part of the reason for my joy was that deep down inside I knew I had done my job well. My baby girl grew up to become a woman who knew that she was worthy of only the best that a man could offer her, not in the material sense but in the far more important sense of respect and dignity. Mission accomplished!

So, let’s celebrate the dads in our lives this Sunday. Together with mom, they form what I call the “anthropological reality” of the family bond. The family bond is not a social construct but rather a critical element in the very nature of what it is to be human. Children need an involved mother and an involved father if they are to have the very best chance to develop into well functioning, capable adults. Happy Father’s Day!

← Honoring the fathers in my life
Helping families in need →

9 Responses to Fathers are role models