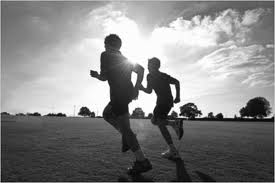 My last post looked at the connection between brain development, specifically the function of mobility, and the attainment of elite status as an athlete.  Today I’d like to follow up with some thoughts on this as it relates to general physical health and education.

It’s no secret that we have an obesity crisis in this country.  Just take a trip over to your local fast food establishment and have a look around.  What is alarming is how this crisis is affecting our children.  The statistics are astounding.

Here are the facts from the CDC:

The health consequences of obesity are many and they are all serious.  In the short term, obese children have a much greater chance of developing cardiac risk factors like hypertension and high cholesterol.  The Bogalusa Heart Study, the longest and most detailed heart study of children ever done, found that 70% of obese 5 to 17 year old children had a least one cardiac risk factor.  In the long term, these children run a much greater risk of Type 2 diabetes, heart attack, stroke, and cancer.

What causes obesity?  It’s really not very complicated.  Except in cases where there is a genetic issue, it’s a simple matter of too many calories being consumed and too few calories being expended.  We eat too much and move too little.  It boils down to poor diet and lack of exercise.  We’ll keep the focus on movement for now and take a look at diet another time.

[callout title=Why physical education?]…movement is a critical element in education because the human brain is the tool through which one becomes educated![/callout]

In their recommendations for what can be done to prevent obesity in children, the CDC says “Schools play a particularly critical role by establishing a safe and supportive environment with policies and practices that support healthy behaviors. Schools also provide opportunities for students to learn about and practice healthy eating and physical activity behaviors.”  So how are our schools responding to this call to action?  By ignoring it!  Last month, the New York Times published an article on how schools are eliminating physical education from the curriculum even as the rate of childhood obesity rises.  Why?  Most lay the blame on lack of funding and No Child Left Behind, the government mandate for schools to meet certain testing benchmarks.  With resources tight, any program not related to the three R’s is subject to the axe.  The result is sweeping cuts in arts programs and physical education.

Talk about short sightedness!  Sometimes the dinosaur mentality of the school system is just more than I can take.  The ability to succeed in a classroom is directly related to the ability of the human brain to take in and process information.  The better a child can do that, the more successful he will be.  Learning begins in utero.  It is a neurological process not an academic one.  As such, every human ability is involved in the learning process.  We are constantly learning through our sensory abilities and our motor abilities.  What this means in terms of physical education is that human movement is a critical element in education because the human brain is the tool through which one becomes educated!

Neuroscientists recently discovered that when we exercise we produce a substance called BDNF (brain-derived neurotrophic factor).  Without getting into the complex chemistry, BDNF essentially acts like a fertilizer in the brain promoting the growth of new neurons, more dendrites and more connections between neurons.  Sound familiar?  So, our brain comes equipped with a built-in fertilizer factory to help it grow and develop.  All we need to do to activate production is get up and move!

Which takes us back to the schools, obesity and physical education.  The reality is that schools ignore this issue because their main goal is the perpetuation of the status quo rather than the welfare of children.  Don’t misunderstand what I am saying.  I know that there are many fantastic teachers out there doing a heroic job with the kids in their care.  What I am talking about is the rigidity of the system.

All one need to do for proof of this is look at an exception.  The school system in Naperville, Illinois, a suburb of Chicago, has embraced daily physical fitness for years because of its impact on brain development, and thus learning and academic performance.  What are the results?  For starters, just about the lowest obesity rate anywhere in the United States.  In 2002-2003 only 3 percent of Naperville high school freshman were overweight.  But the real test is academic performance and once again the Naperville kids shine.  In 1999 Naperville’s eighth graders participated in the TIMSS (Trends in International Mathematics and Science Study) test which included students from 38 countries.  They finished first in the world in science and sixth in math.

The proof is in the pudding.  What are the rest of our schools waiting for?

← Olympic Performance and Brain Development
From blindess to sight →

8 Responses to Movement, health and learning