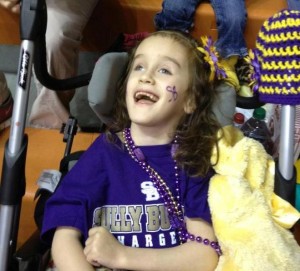 At a time when there is so much negativity in the world it is important to remember all the miracles that happen on a daily basis. I’d like to share one such miracle. This month we want to celebrate the Nelson family – Derek, Desiray, Mackenzie and Elliana.

A little background: Desiray was only 23 years old when their first child Mackenzie was born. Mackenzie had a stroke in utero and as a result her cortex did not develop. She was diagnosed with a rare disorder called Hydranencephaly. The parents were told their baby would not survive past the age of two.

Can you imagine the anguish these young parents felt? But they didn’t give up. The next few years they met with numerous professionals looking for answers. But all they were given was a list of what their child would never be able to do. But under Desiray’s very sweet soft-spoken nature was a core of steel. She was not willing to accept the prognosis and began the search that ultimately brought them to REACH.

We saw Mackenzie for the first time in August 2008, just a couple weeks short of her 2nd birthday. The flight alone from South Dakota to Medford was a major undertaking. The Nelsons faced many obstacles beyond the normal nightmares of flying with children these days, including flight attendants who did not understand that Mackenzie couldn’t sit on her own and a missed flight in San Francisco. These young parents had our utmost respect before we even met them!

[callout title=From Blindness to Sight…]”The therapists were astonished with Mackenzie’s progress and abilities. They showed Mackenzie several pictures on flash cards then asked her to choose between 2 pictures, and as we would expect, Mackenzie got them all right.”[/callout]

We fell in love with Mackenzie at first sight. What a little trooper! When we evaluated Mackenzie we found that she was functionally blind, could hear sounds, had no understanding of spoken language and could only make a very limited number of sounds. Her response to pain was inappropriate and her body was so tight that she would cry in pain when placed on her tummy. Her arms were tight and held close to her body and could not be lifted above her head. Mackenzie’s hands were always clenched in a tight fist. Seizures, health, eating and sleeping were all big problems.

We went over our evaluation and explained what we needed to do to get her to the next level. Desiray and Derek were thrilled that we focused on Mackenzie’s abilities rather than her disabilities. We designed a developmental program based on our findings and taught the Nelsons how to carry it out at home. Despite the fact that both parents work full time, with the help of Desiray’s parents and volunteers they have been able to carry out the full program!

Since August 2008, the Nelsons have brought McKenzie to us every 4 months for re-evaluation. So what has changed in Mackenzie’s life since then? I’m sure you’re very curious to find out! She is much looser and can now easily lift her arms over her head. She enjoys spending time on her tummy and can crawl down an inclined plane. Now her response to pain is perfect! She can follow simple instructions and loves to feel soft blankets and hold on to her stuffed toys. Mackenzie is a very happy child who knows what is going on around her and has the most contagious laughter. Her health is excellent, she very rarely has seizures, she eats well and sleeping is no longer a problem.

Mackenzie is about to begin kindergarten. Recently, as part of the entrance process, she was evaluated by the Children’s Hospital in Sioux Falls. Here is what Desiray reported to us: “The therapists were astonished with Mackenzie’s progress and abilities. They showed Mackenzie several pictures on flash cards then asked her to choose between 2 pictures, and as we would expect, Mackenzie got them all right.” Yes, Mackenzie not only sees details at near point but she can also recognize pictures!

Desiray went on to say, “Mackenzie evaluated above what was expected of her by the therapists and I was a proud momma!” Desiray went in expecting to once again stand up for her daughter and fight for the opportunity to show what Mackenzie could do. But this time was different. Mackenzie performed and the therapists ended up being believers! Mackenzie has progressed in all areas of ability! What an achievement!

We also often see enormous growth and change in the parents of our children. They live with their child’s problems on a daily basis but choose to focus on what can be done to improve their child’s life. This is true of the Nelsons and especially of Desiray. She is still a soft-spoken person, but don’t mess with this mother when it comes to her children!

Desiray and Derek teach us all important lessons in persistence, determination, and a tremendous appreciation of the miracle of human development and potential!

20 Responses to From blindess to sight