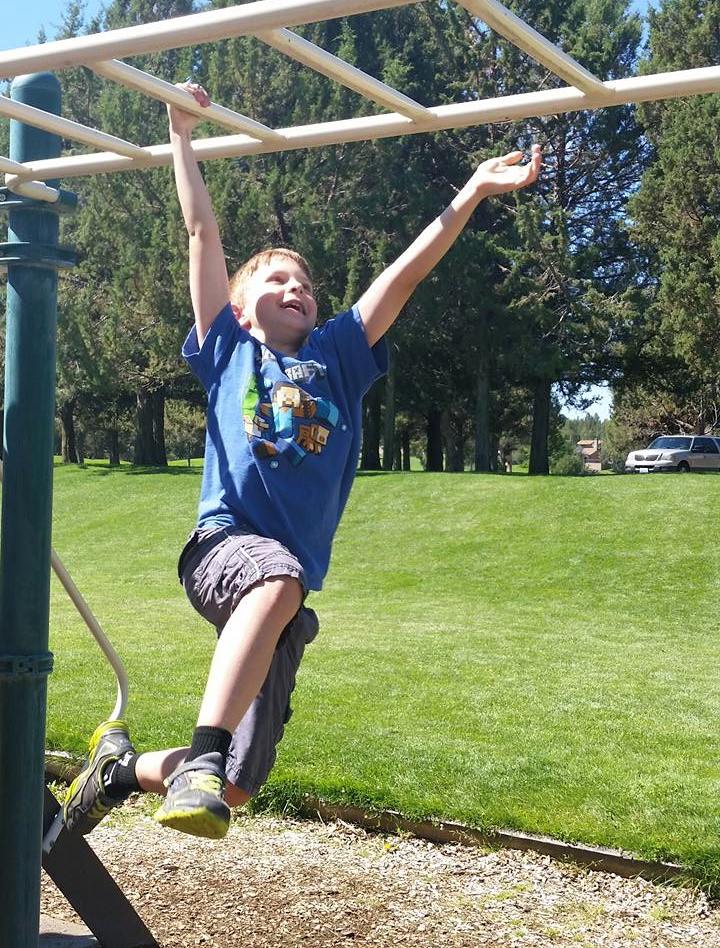 It is our great joy to introduce you to Isaac. We are sure you will find his story inspirational.

Isaac is nine and a half years old and the older brother of Raquel. We saw him for the first time a year ago. Isaac came diagnosed with a Sensory Processing Disorder and Pervasive Developmental Disorder, a condition that placed him on the Autism spectrum. Of course, we pay little to no attention to those labels as they tell us nothing about who Isaac really is and how he functions.

Isaac’s parents first suspected his difficulties when he was about two years old but there were red flags almost from the very beginning. In reviewing his birth history, we learned that he had a prolonged labor, cord strangulation and fetal distress. He was very irritable as a baby. As he developed into a toddler, he had sensory hypersensitivities particularly in tactile function. At about two and a half years of age he learned to read on his own, an early indication that despite some difficulties he was a bright little guy. Speech was very late in developing, with first words coming at around two years. Most concerning was Isaac’s social development. He could not get along with other children.

Isaac’s mother gave us the following list of functional problems.

1. Isaac’s behavior was volatile and unpredictable. He averaged 2 to 3 major tantrums or emotional meltdowns per day. Meltdowns often lasted an hour and he could become very violent. Almost anything could set him off. Particularly upsetting to him were situations where the spotlight shined on him. Ask him a question, complement him in front of a group and look out! A perfectionist, if he tried to do something and did not succeed, look out! Isaac’s mom expressed her real fear that these emotional outbursts would escalate and become more violent as he grew into his teen years.

2. Isaac often became obsessed with thoughts. Once he had a thought in his mind, he could not get rid of it.

3. He had a poor understanding of cause and effect.

4. His understanding of spoken language was very literal. He could not “read between the lines”.

5. He had great difficulty expressing himself verbally, particularly with regard to his feelings.

6. He had frequent absences where he completely tuned out.

7. He had great difficulty reading social cues in people and had very few friends.

8. He was very cautious physically. He had problems of coordination and balance. Anything that was high or fast was a problem. He could not ride a bicycle.

9. He had almost no self-confidence in his abilities.

Based on our evaluation of Isaac’s neurological function, we designed a developmental program for Isaac which consisted of brain organization activities like tummy crawling, creeping (hands and knees), walking and balance activities. Along with his physical program, Isaac also had several intellectual development programs to improve his understanding. Additionally, we stressed the importance of good nutrition and suggested, based on Isaac’s symptoms, that he eat a gluten-free diet.

About one month after we saw Isaac, his mom posted the following message on the REACH Facebook Page. “My 8 year old son Isaac started the REACH program about a month ago and I am amazed at the progress he has made in such a short amount of time. He went from 2 or 3 extreme meltdowns per day to maybe 1 per week. This is remarkable with being home for the summer and having to deal with his 5 year old sister! LOL. He is also trying new things! From new foods, to giving people more hugs, to taking more risks at the park. His awareness of others and social communication has improved tremendously as well. I am beyond grateful for all your help and guiding my son to his true potential”.

In May, we saw Isaac again for re-evaluation and the changes in him were amazing! Significantly, his behavior improved dramatically. His meltdowns decreased from one per week to virtually none. His mom reported that the last tantrum was on Valentines Day and there was a very understandable explanation for it. So, no tantrums in three months compared to 2 or 3 tantrums per day at the beginning. Also, now when he did have a tantrum, it was much less intense and quickly diffused. Instead of being completely out of control for up to an hour, now Isaac can pull himself together in a matter of minutes. Isaac is now in control of his emotions!

We also saw tremendous improvements in Isaac’s mobility. His coordination and balance are much better resulting in better crawling (now in cross pattern), creeping and running (also in cross pattern). He runs faster and his movements are much smoother. In addition, Alex can now hop and skip, and is much more adventurous and willing to take physical risks. The change in his self-confidence is almost unbelievable! American Ninja Warriors you’ve been put on notice!

Along with all of those functional changes, Isaac is chewing much better and his appetite has greatly increased. Finally, he no longer has any absences at all… completely eliminated!

What an incredible joy to be a part of helping Isaac develop into the delightful boy he has become! When we think back on the first day we met him it is almost unbelievable that he could have changed so much in one year. Knowing that his parent’s fears for the future have turned into hopes just makes his transformation all the sweeter. Bravo for Isaac and his mom, dad and sister for doing the hard work that made it possible!

← The REACH Difference
Run for Reach →