The World Congress of Families (WCF) is an international network of pro-family organizations, scholars, leaders and people of goodwill from more than 80 countries that seek to restore the natural family as the fundamental social unit and the ‘seedbed’ of civil society (as found in the UN Universal Declaration of Human Rights, 1948). 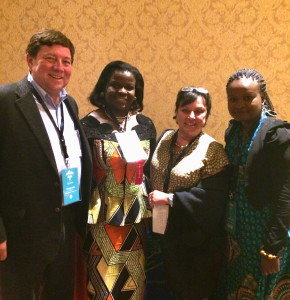 Conceição and I have been actively involved in pro-family work since the early 1980’s. The reason for this is really quite simple. Much of our work involves trying to help children with developmental difficulties. Those kids need every advantage they can get if they are to overcome the obstacles that lie in their path. So we always shoot for ideal circumstances because they give us the best chance of success. Our experience working with children demonstrates clearly that the key element in successful physical, intellectual, emotional and social development is the family. There is something about the anthropological reality of the family bond that increases a child’s chances of doing well in life. Modern science teaches us much about the neurobiology that underpins this family bond. It tells us that each parent brings unique gifts to the table, gifts that cannot be replicated or replaced. We need to recognize that and celebrate it.

We defend every child’s right to life also for very practical reasons. Many people view the children we work with as drains on society. In a materialistic, utilitarian culture it just doesn’t make good sense to spend resources on those who do not produce. It’s true, many of our kids will never be productive citizens in the materialistic sense. Because of this our kids are on the front line of the “life” issues. They are the first victims of abortion and often are victims of infanticide. We fight against this for many reasons but primarily because it is based on a false premise. Life is full of mysteries and this is surely one of them. Despite functional difficulties, every child has a life purpose, every child has value.

Our families (parents, brothers and sisters, etc.) and their wider community get to see this on a regular basis because they change along with their child. The growth experienced through working with a brain-injured child is, I suppose, unique to each individual. Although I have been under its spell for four decades, I still find it difficult to describe exactly what happens when one works nose to nose with a brain-injured child. It is not an earth shattering event, but rather something that happens quietly, beneath the surface of the daily activity. It is an experience that somehow makes one a bit more human and a bit more humane. I like to think of it as food for the soul – spirit nourishing spirit. Truth is, in one of life’s great paradoxes, I think the brain-injured children of the world are our most precious natural resource. This is not because of what they can do because, obviously, so many of them can do nothing in a functional sense. Rather, it is because of what they do to us. When one sees the amazing impact these children have on the lives of everyone around them; when one sees that this impact often continues long after they have left their earthly existence; there is little else that needs to be said about their dignity and worth. That’s why we fight to protect them!

This was our first time back to the World Congress of Families since I spoke at the World Congress of Families II in Geneva, Switzerland in November of 1999. It was an exciting and exhausting week at the magnificent Grand America Hotel as guests of the Sutherland Institute of Salt Lake City. The week was filled with stimulating lectures, meetings with leading pro-life and pro-family advocates and non-stop networking with families and professionals. We did interviews for the Christian Broadcasting Network, the C.L. Bryant “America on the Edge” radio show, and the “Watchman on the Wall” TV program with Errol Naidoo, President of the Family Policy Institute in South Africa.

There were many highlights. Here are just a few.