The story of the founding of the REACH Family Institute is mostly a story of love… with a good dose of romance, dreams, struggle, perseverance, and triumph thrown in for good measure.

1977 – Charles and Conceição Solis met at the world famous Institutes for the Achievement of Human Potential in Philadelphia, PA. Charles started training in Human Development at the Institutes immediately after graduation with a B.S. in Biology/Pre-Medicine from Loyola University in 1975. Conceição, a native of Brazil and Speech Therapy student, started her training in 1976 at the Centro de Reabilitação Nossa Senhora da Gloria in Rio de Janeiro, a sister organization of the Institutes. Beginning as a volunteer, her passion and ability quickly became evident and within months she was invited to study in the United States. Upon her arrival in the United States, Conceição’s first assignment was in the School for Human Development where Charles was the director. In the cauldron of responsibility for the lives of forty two brain-injured young adults a romance slowly blossomed.

In 1978, that romance was put to the test when Charles left for almost six months to lead a group of six students from the School for Human Development on a 2,000+ mile thru-hike of the rugged Appalachian Trail, the longest continuously marked footpath in the world. This was the first and remains the only time in history that a group of young people with neurological problems attempted and completed a feat of this magnitude. Charles was 24 years old at the time!

1981 – After taking a brief hiatus from working with children, they began their own small consulting practice in Mt. Shasta, California. Having traveled the world while working at the Institutes, it was no surprise that almost from the beginning their new work together involved international travel. In January 1982, Conceição gave birth to Juliana and later that year they all moved to Rio de Janeiro, Brazil. From the beginning, Juliana took part in the work of her parents traveling with them throughout the world. Early in life she shared her toys and served as a friend and playmate to the children. Through her interactions with the children and exposure to her parents’ work she learned deep lessons about patience, tolerance, compassion, dedication, service, success, and failure. She grew up to be an extraordinary woman. Today she serves as a trusted advisor and Board Member.

1983 – In January, Charles traveled to see children in South Africa with colleagues from the Child Development Centre in St. Briavel’s, England. Charles and Conceição continued their work in South Africa (2 months per year) for the next 5 years. In March Charles and Conceição moved back to the United States settling in Marin County just north of San Francisco, California. As they established their consulting practice in the Bay Area, they also worked as consultants to the Children’s Cultural Center, a Montessori school located in Sausalito. In November, Charles and Conceição began seeing children in Caracas, Venezuela with the financial support of the Alberto J. Vollmer Foundation and the moral support and encouragement of Ambassador Alberto J. Vollmer  and his wife, Sra. Christine de Marcellus Vollmer.

1984 – Charles and Conceição began seeing a group of brain-injured children in Versailles, France.

1986 – In July, the French clinic was relocated to Toulouse in southwest France where Charles and Conceição worked with hundreds of families from throughout France, Spain, Morocco, Algeria, and Tunisia over the next twenty years. Today, Charles and Conceição continue to provide consultation services for families in Europe at their bi-annual clinic located near Orleans. They are now in their 28th year of working with children and families in France.

1988 – Charles and Conceição initiated a pilot project with three families in Caracas, Venezuela in an attempt to bring the benefit of their expertise to extremely poor families with brain-injured children. Once again, the work in Venezuela was supported by the Alberto J. Vollmer Foundation with the help of Ambassador Alberto Vollmer and his wife Sra Christine de Marcellus Vollmer. For the next four years, Charles and Conceição donated their time and expertise to this project.

1991 – After 8 years of living in Marin County, California, Charles and Conceição moved their work to Ashland in southern Oregon.

1992 –  The population of the pilot project was now at 32 families and there was a 10-year waiting list for appointments! Faced with this dilemma, Charles and Conceição created a professional training program in Holistic Brain Development, to empower Venezuelan professionals with their knowledge and expertise and thus give many more thousands of children an opportunity for a better life. At this point, the pilot project was officially christened Programa Leopoldo in honor of Leopoldo Vollmer, Alberto and Christine’s son, a severely brain-injured child who did the program for ten years and provided much of the inspiration for this effort.

[callout title=Pope John Paul II]”Programa Leopoldo in Venezuela is an extension of the Gospel of Life from the family itself.”[/callout]

The Professional Training Program in Holistic Brain Development, accredited by and taught under the auspices of the Colegio Universitario de Rehabilitacion in Caracas, quickly became the most popular post-graduate course in Venezuela for professionals working in rehabilitation and was made a sub-specialty of both Physical and Occupational Therapy by the university administration. Between 1992 and  2002, Charles trained 205 doctors, therapists, teachers and psychologists. During that time, 34 “Programa Leopoldo” centers opened in hospitals, schools, child development centers and orphanages throughout Venezuela. In 2003, due to the political and economic crisis that gripped Venezuela and the resulting threat to security and loss of funding, Charles and Conceição’s direct involvement in Programa Leopoldo came to an end. However, the work continues today thanks to those dedicated professionals whose lives were changed by Programa Leopoldo. 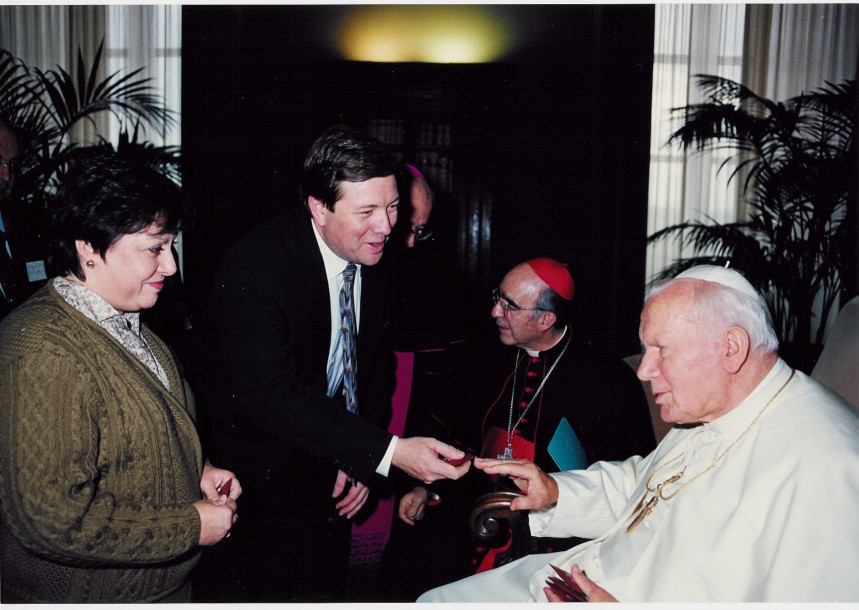 1997 – As a direct result of their work in Venezuela, Charles and Conceição were invited to speak at and help organize the very first conference ever held at the Vatican on the subject of “Brain-injured Children and the Family”. Sponsored by the Pontifical Council for the Family and the Pontifical Council for Pastoral Care to Health-Care Workers, this conference convened leading professionals from throughout the world to discuss this very important topic, to learn from each other, and to exchange ideas. Charles was given the honor of writing part of the conference conclusion, a document that became Vatican policy related to how the Church is to engage with developmentally challenged children and their families. The final speaker at the conference was Pope John Paul II. The Holy Father surprised Charles and Conceição by singling out Programa Leopoldo. Echoing their philosophy, he said “The family is an irreplaceable community in these situations because of the quality, talent, and tenderness of the loving care which only parents can unselfishly offer their children. Programa Leopoldo in Venezuela is an extension of the Gospel of Life from the family itself.”

Through Programa Leopoldo, Charles and Conceição demonstrated that any parent is capable of making a significant difference in their child’s life provided they have three things – knowledge, determination, and most of all love. Once their little Venezuelan secret was made public they were bombarded with requests for help from around the world. Recognizing the tremendous need and their obligation to try to meet that need they decided the time had come for a new stage in their professional path.

1998 – In May, the REACH Family Institute was incorporated as a federally tax exempt 501(c)3 non-profit organization organized for educational research and charitable purposes.

Throughout the years, Charles and Conceição have studied with some of the world’s top professionals in order to continually improve their knowledge and offer families the most effective approaches to improve brain function. Amongst them are Dr. Alfred Tomatis (Tomatis Method), Dr. John Downing (Neuro-Sensory Development), and Dr. Steve Vazquez (Strobic Phototherapy).